In September, I went to see some relatives in Changchun in the middle of an area known in China as the Dong Bei (Northeast) region. On the map, it looks sort of equivalent to New England on the US map. Dong Bei is a special region because it is outside (to the north) of the Great Wall. When the Han civilization were developing some 5 thousand years ago, there were some nomads live there.  Around 2 to 3 thousand years ago, the agricultural society of Han could not stand the fast “raid rub and gone” style of invasion of the nomads. So, they started to build sections of walls.  The First Emperor of Qin Dynasty (221- 206 BC) connected those sections and made it the famous Great Wall. In fact, it was not completed (into one from the sea to the desert of Xin Jiang, complete with watch towers) until Ming Dynasty (1368 – 1664).  Before then, there were a lot of communication back and forth.  The “Northern Country” adapted Han civilization but maintained their “toughness.”   They were probably part of the people in the Northern Dynasties in the “North and South Dynasties” after Han Dynasty.  (If you are into Chinese Calligraphy, the famous Wang Xi Zhi is from the South Dynasties and the Northern is represented by the Wei Bei, Tomb Stone, style.) The “northern barbarians” Liao, and Jing pushed Sung Dynasty into setting the capital  south of Yangzi River.  Liao and Jing both claim Dong Bei as their origin and home base.  Later, Mongols, also came from there, swept through Asia and Europe.  People of Liao, Jing, and Mongols were absorbed into the Chinese civilization with in hundred years of each of their arrival.  Now, it is nearly impossible to tell who might be of Han, Liao, Jing, or Mongol ancestry.

Near the end of Ming Dynasty, natural disaster, (draught and flood) and rebels was all over.  General Wu, who was the commander at the Great Walls gate, was afraid the rebel might take his most beautiful wife then in Beijing, made a deal with the Manchus whom he was to guard against.  He let the Manchus in to help him rescue his wife. The Manchus did and took the opportunity to take over all China land.  That was the beginning of the Manchu reign, the Qing Dynasty which ruled China from 1644 to 1911. That is why the name Manchuria Region is the name known to the Europeans.

In Qing Dynasty, The Manchus moved most of their people into the south of the great wall to be the ruling, Royal race.  They moved many Han people from Hebei and Shandong out of the wall to live in Dong Bei area. Though far north, this area is surprisingly good for agriculture, rich in rice, wheat, sorghum, and many kinds of green vegetable. Four major cities line up on a north-south line in the middle. They are, from the north, Harbin, Changchun, Shengyang, and Dalian.  Several years ago, I toured these four cities in a tour group. This time, I took a tour to Harbin, Manzhouli, and Dandong with some relatives.

Because of its location, there are many Russian immigrants. After Russia’s October revolution, many more Russian refugees came through to escape the Red Disaster. Many settled down.  Since they are not red, the Chinese called them White Russian even though they are not from the  region called White Russia.  When the Chinese Communist government kicked out most of the foreigners, Harbin still shows a lot of Russian influences. St. Sophia Church is a very beautiful Eastern Orthodox church build by the Russian Immigrants completed in 1932. There is no more Russian Eastern Orthodox to serve so it is a museum now. Unfortunately, it was in repair and closed when we went.

Song (Pine) Hua (Flowers) Jiang (River) 松花江 flows by Harbin.  Ever since we were little, we were singing the tune of “My sweet home is by the lovely bank of Song Hua Jiang.”  That was because many refugee came out there, escaping the war and Japanese occupation.  It had about the same sentiment as people from Alzas and Loraine people in France escaping German occupation, or Polish people escaped German and later USSR occupation.  I had to visit the River.  It is not a quaint river any more. There is a large touristy park build by the government and memorial for the Heroes of the Red Revolution.

Several morning markets are truly old fashioned farmer’s markets every morning starting 5 AM. They block off  sections of road from cars for it till 8:30 AM.  Near by farmers and vendors lay vegetable on the ground with dirt still on it. Fish, shrimps flap on the ground in shallow pans. You can buy a chicken and have it killed and feather pulled right in front of your eyes. There are also fresh, hot soy milk, fried dow, sticky rice cakes … and that was what we went for, typical Chinese breakfast. There are also “dry goods.”  I bought a pair of “relatively expensive” sports pants from a vender for Y65, that is, about $9. The less expensive ones sold for Y55 or less.

On the street, there are interesting glass sculptures.  An old fashioned Russian lady (a bowing figure painted in red) welcomes you to the shop which is in repair.  The sheet covering the front reads “Central idea of Socialism: Strength, democracy, equality, civilization, freedom …” (and many more items of virtue than I can list here).

One of the main streets is called Gogol Street and a huge bookstore there called Gogol Book Store, of course, named after the famous Russian poet. On one side inside is the Children’s book section,  I am glad to see many children took up seats there, reading diligently.  However, only adults I saw seemed to be parents dozing off, taking up chairs. We took shelter in it from the pouring rain for a couple of hours. Our plan was to go to the train station on 5PM. However, it took us nearly an hour, after walking many blocks in the rain trying to catch a taxi in vain. We finally found a suitable bus line. The bus’ final stop at the train station is across the huge Train Station Square which we had to walk across in the rain.  If we got a taxi, it would have taken us right into the station building down stairs. Luckily we left plenty of “safety minutes.” 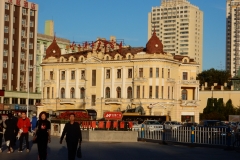 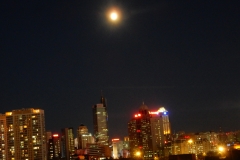 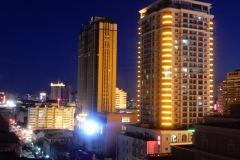 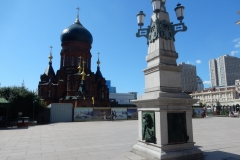 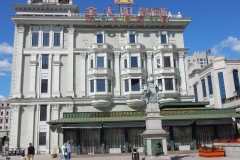 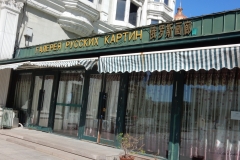 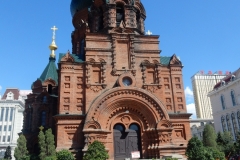 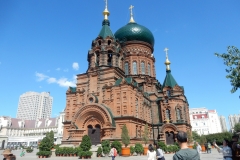 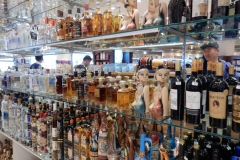 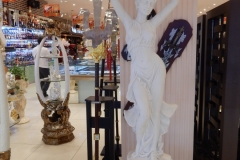 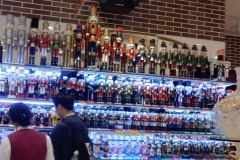 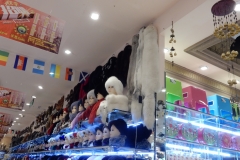